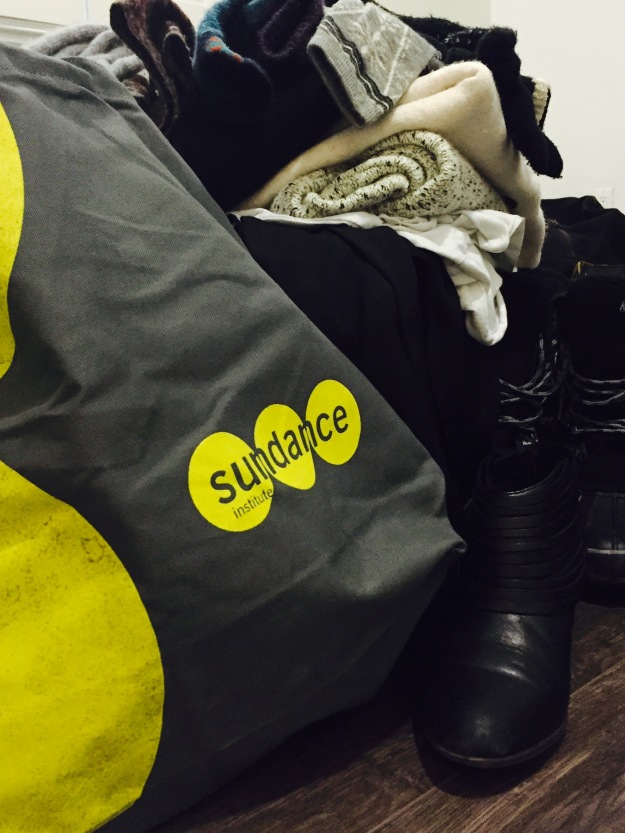 Before this all goes into a suitcase. Before we load up the car with bags, boots, and Kind Bars for the road trip, I have to take a moment and not just pinch myself but give a huge SHOUT OUT to some incredible filmmakers we now have the privilege of working with.

And we, Through The Wilderness, had the business savvy (If I dare say so, myself) to invest in the film. And now, as Executive Producers, we’re on our way to Sundance for its world premiere. I can’t wait for the audiences to fall in love with this film!

I have dreamt of attending Sundance for years. Long before I even had an idea of how I could write scripts, let alone, make a movie.  It can be something terrible when what we don’t know manifests into an obstacle so large you never hunt down your dreams.

But I did…against huge odds. I did.

I moved to Los Angeles in 2008 to pursue film. I wasn’t sure how that would look. I was determined to get into film school, though. I ached to learn how to write a script.  How to envision a story for the screen and then bring it to life. I WORKED hard to learn what I could and got into USC School of Cinematic Arts MFA in Screenwriting program fall of 2008 (days after my wedding– there were a ton of firsts happening that year!)

In my very class at USC, I met a young guy who was really smart and funny. And he had a ‘voice’.  He had what I knew we each could have. What we would work towards developing. He had what plenty more other writers did in the program, except his was defined. It was unique. Stood out. And he was a hard worker. He gave everything to learning more.  I admired that. Kerem and I became friends for more than his approach to screenwriting but because I found him silly and refreshing.

I think it was that first week or so I met Ross, too. I remember taking the bus from USC north to Echo Park and thinking…”how can a dude so young be so smart?”  And Dave Hunter…he just makes me smile. His storytelling is incredible and entertaining.

By the end of two years I had been in classes with Kerem, Ross and Dave. We were friends. Beers had been shared. They knew and dug my husband. And I was a supporter of their endeavors.  I became a fan, though, when the scenes from the last class I took with them made its premiere at the Los Angeles Film Festival years later. The Young Kiewslowski moved me. I was touched by frank and tender characters. By unique story. It was fresh and authentic.

When the fundraising campaign came for First Girl I Loved, it didn’t take us long to get on board.

PSH Collective is a small but powerful group of filmmakers. I now call Seth, a smart and powerful producer, a friend, too. It’s truly an honor to be a part of this film. And to bring them all into the Through The Wilderness tribe.

So, here’s a Toast to PSH Collective, First Girl I Loved and Sundance.  Let the party begin!

Ahhh… FADE OUT. Those two glorious words.  Those words that make a screenwriter finally let out the breath they’ve been holding in, that breath that has been tearing up their gut, piercing their heart, and rearranging shit in their soul.  Okay, maybe if you write… Hangover IV or some sweet romcom, the story might not hold you captive like this last draft of mine has done to me.  Maybe I’m just sharing more about a psychological problem I have but hey, I’ve got a shrink and we’re working on it.

But writing for me is a fierce exercise in digging deep, challenging my skills and trying really hard to honor wisdom from my amazing USC thesis teacher, David Howard,  [paraphrase] “For God’s sake, don’t be boring…”

SHIPSIDE, my latest feature has been living with me for a long time. I know these characters. I have a relationship with them. And with each revision, I attempt to deepen that. This last revision, though, was about deeper development of the antagonist.  Giving him flesh.  And because that was new and hard… (have I mentioned he’s the spirit of a notorious slave owner?) when I got to the end, when I hit FADE OUT… I sat back from the computer and felt a bubbling of emotion rising. I went to my husband, curled up on the bed and cried.

For two days after sending the script off to my director and producer, I had to work through the emotions of what I was forced to discover to do this revision. That this horrible man was once a human with feelings, betrayals, wishes and dreams. I gave him parents and a home, all to understand how he could become the awful evil man he was.  And for me, in my process, i had to let this character ruminate in my head, and hold him in my heart, and that meant i had to let all his dark evilness come hang out, too.

FADE OUT was relief.  FADE OUT meant “breathe, Stacey”.

i will be writing more about Shipside, as our pre-production ramps up. I will be writing more  about creating this character and telling this story about a haunted poor young single mom.  I  plan to document the full production, the trip down south to tour plantations, to see the manacles, to look to the Atlantic Ocean and envision the ships coming over the horizon and then…because i need to see this too, envision the ships of everyone going home.

i will be searching for FADE OUT in a lot of places, I’m sure.

And maybe…just maybe in your own work, in your day, you know what this feels like? Do you?

One of the nerdiest blogs of WordPress.

Women of TV, Film and Media: The female voices of filmed entertainment

Blurring the lines between poetry and prose

Eight writers in four states and on three continents talking about what it takes to make a great story.

Nail Your Novel - Writing, publishing and self-publishing advice from a bestselling ghostwriter and book doctor

find and live your purpose

Editor in Northern California. Interested in tiny things, nineties nostalgia, old jungle mixtapes, punctuation, and my cats. Not to be fed after midnight.

A celebration of linguistic creativity

Live to Write - Write to Live

We live to write and write to live ... professional writers talk about the craft and business of writing

Strong Language
We Minored in Film

Geeking Out Over Film & TV